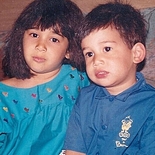 Meaghan Rath was born on June 18, 1986 in Montreal, Quebec. Her father is the CFO of a pharmaceutical company and her mother is a denist. While neither of her parents are in the entertainment industry, Meaghan’s younger brother, Jesse, found himself bit by the acting bug. The two have appeared in Aaron Stone, Prom Wars, 18 to Life, and Being Human US together. From an early age, Meaghan knew she wanted to act, so as a Christmas present her parents put her in acting classes. She has attributed these classes to helping her overcome terrible shyness and insecurities from growing up in a predominantly white community. “In Montreal, there weren’t that many mixed kids around when I was growing up, which is funny, right, because now it’s the complete opposite. […] I was always never fully anything that everyone else was. I always just felt different; I was brought up differently than everyone else was. It was something that made me really insecure.” Meaghan’s father is of British and Austrian decent while her mother is Indian. Her mother moved to Canada when she was 13 along with her family due to political unrest in Goa. When Meaghan was 22, she and her family toured India, including her mother’s birthplace. Meaghan’s first professional acting role was in the Canadian drama Lost and Delirious about a new student at a boarding school who discovers that her roommates are lovers. She was 13 at the time of her casting. While the film received mixed reviews, it premiered at Sundance and the acting was given critical acclaim. Despite being hand picked by a casting directing, Meaghan’s role in the film was small. But she found humor in that fact and later joked in Maxim interview, “I played Alison’s Friend #3 which is widely considered my most compelling work to date.”

Following her film debut, Meaghan struggled finding roles in both television and film in Canada. 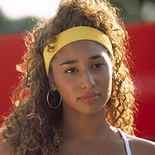 At the time, few films were being made in Montreal, and roles that were available were not open to Meaghan. Of her experience, she said, “I was either too ethnic or not ethnic enough. I didn’t fit into a category.” She has further explained that as a child, the question of who would play her parents in the production also played hindrance in her casting. Following Lost and Delirious, Meaghan essentially took a break from acting professionally and finished high school. She still auditioned here and there, but nothing serious came her way – until the day she graduated high school. On that fateful day, Meaghan received the news that she had been cast in the young adult television series 15/Love. In the matter of minutes, she went from full time student to full time actress. The series ran for three years. Despite her early struggles to find roles, Meaghan found success on the smaller screen being cast in made-for-television movies like I Me Wed and My Daughter’s Secret. In between acting roles, Meaghan attended Dawson College in Montreal where she studied Cinema and Communications. She continued to make guest appearance on various Canadian television shows, and in 2009, her series The Assistants premiered on The N. While the series was not renewed for a second season, this did not stop Meaghan. That same year, she joined her brother on the Disney XD television series Aaron Stone. This was their second collaboration following the 2008 movie Prom Wars: Love is a Battlefield.

As fate would have it, a year and several auditions later, Meaghan was cast in her most well-known role to date – the North American version of the popular UK drama Being Human. In 2010, it was announced that Meaghan would play the role of Sally Malik. The sassy, sarcastic ghostly roommate of blood addict vampire Adian and neurotic werewolf Josh. 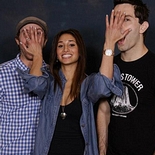 While fantasy genre shows found a rise in popularity around that time, Meaghan described the series as feeling like “an underdog” and helped her connect with the show as she often felt like an underdog herself. Being Human was not only Meaghan’s big break, but she also became incredibly close friends with her co-stars, Sam Witwer and Sam Huntington. She described their first meeting as “a weird thing” because they immediately connected. She went on to say, “It’s [their bond] never gone away; those two are my best friends. I’m so close to them. They know everything about me, even right down to all the little sick details.” To this day, the three are very close friends. During her stint on Being Human, Meaghan co-produced and co-starred in the film Three Night Stand. In it a married couple’s romantic weekend is turned upside down when the husband’s ex-girlfriend, a woman he’s secretly obsessed with, is running the ski lodge where they’re staying. Sam Huntington and Meaghan starred as the doomed married couple. In the film, Meaghan was able to show off her French skills, as growing up in Montreal she was raised bilingual. As the fourth season of Being Human began to film in 2013, the cast and creators made the decision that it would be the show’s final season. While there was interest in a fifth season, the show would likely undergo drastic budget cuts. Since the show already had a small budget to begin with, those involved felt the quality would suffer. However, this final season gave the writers the opportunity to explore the romantic relationship between Meaghan’s Sally and Sam Witwer’s Adian. Previously, the network would not allow it. The show aired its series finale on April 7, 2014, but this did not hinder Meaghan’s career at all. In fact, several months later, she appeared in a three episode stint on the television series Kingdom. 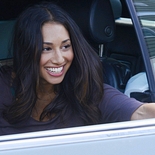 The following year was huge for Meaghan career wise – with a total of 14 episodes worth of recurring and guest appearances on primetime and premium cable television. Meaghan’s first recurring appearance came with the Cinemax series Banshee. Her first episode aired on January 16, 2015 and concluded a month later. She played Officer Aimee King, the sole officer in the corrupt Kinaho Police Department. Next came a guest appearance on the acclaimed Fox comedy New Girl as May Esperas – a love interest for the character Coach. Meaghan appeared in a total of 5 episodes over the course of two seasons. Meaghan then appeared on the ABC mystery anthology Secrets & Lies as Nichole, the aunt of the murder victim. To wrap up her guest appearances in 2015 by playing the murderer in an episode of the Canadian crime show Motive. While the majority of these episodes were filmed in 2014, they actually did not air until 2015. The biggest news of 2015, though, came on in February when it was announced Meaghan had been cast as leading lady in the pilots for the Fox comedy Cooper Barrett’s Guide to Surviving Life and the NBC comedy People Are Talking. Not only did this make her a series regular, but she was able to relocate to Los Angeles where the show was filmed. This was a major departure from her previous work, as she had almost exclusively worked in Canada. Both pilots were picked up, so Meaghan’s character was replaced in People Are Talking. 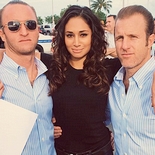 While Cooper Barrett only lasted on season, this did not stop Meaghan. Several months after the cancellation, Meaghan was cast in the final season of the crime drama Rogue. She played Clea Annou a sharp San Francisco police detective with relentless dedication to her job and her family. This was the second police officer that Meaghan would play, but it would not be her last. In 2017, Meaghan was cast in the pilot for The Trustee – a comedy about a cop and an ex-con teaming up; however, the show was not picked up to series. In good news, though, Meaghan was quickly cast as a series regular in the long running CBS procedural Hawaii Five-0 as Tani Rey who is recruited by Danny and Steve to join the Hawaii Five-0 Task Force. This is the third police officer Meaghan has played. Filming of the series takes place in Hawaii, and Meaghan relocated there during filming. Meaghan co-starred in the series for three seasons. Also, this year, Meaghan returned to her Canadian roots and appeared in an episode of the comedy Schitt’s Creek, starring friend Dan Levy. Meaghan also has a film in post-production called The Clinic that is set to be released this year. She plays Dr. Lane. Little about her character has been released and it is currently awaiting a distributor. Following the ending of Hawaii Five-O, Meaghan was cast in the pilot Jury Duty along with her then-fiancé (now husband); however, due to the 2020 pandemic, the pilot was shelved and the actors released from their contracts.