Meaghan Rath (Being Human, Hawaii Five-0) is set to recur in Hulu‘s How I Met Your Father‘s second season, premiering January 24. She will bring to life the character of Parker, a co-worker of Jesse (Christopher Lowell).

The standalone sequel to CBS’ How I Met Your Mother follows Sophie (Hilary Duff) as she tells her son the story of how she met his father — a story that catapults viewers back to the year 2022. A time when Sophie and her close-knit group of friends are in the midst of figuring out who they are, what they want out of life, and how to fall in love in the age of dating apps and limitless options.

Rath can next be seen in the Fox anthology series Accused, premiering January 22. She also stars in the Canadian series Children Ruin Everything in the role of Astrid, a mother of three.

Previously, she was a lead in Syfy’s Being Human opposite Sam Witwer and Sam Huntington, the CBS series Hawaii Five-0, and 2016’s Cooper Barrett’s Guide to Surviving Life. Recurring roles include Fox’s New Girl, Cinemax’s Banshee, and ABC’s Secrets and Lies.

She is repped by CAA, Hess Entertainment, and Goodman, Genow, Schenkman, et al.

By Sarah, on January 19th, 2023, under New and Rumors, Television // Comments Off on Meaghan Rath Set To Recur In Season 2 on ‘How I Met Your Father’

By Sarah, on July 12th, 2022, under Gallery Update, Television // Comments Off on ‘Children Ruin Everything’ Season 1 Screencaps

By Sarah, on March 1st, 2022, under Gallery Update, Television // Comments Off on ‘Children Ruin Everything’ Season 1 Promos & Stills

‘Children Ruin Everything’ Renewed For Season 2 At CTV; Roku To Launch In U.S. Later This Year https://t.co/lX5l4DHHI0

By Sarah, on February 12th, 2022, under New and Rumors, Television // Comments Off on ‘Children Ruin Everything’ Renewed for Second Season

A huge congratulations to Meaghan and Jack about their impending parenthood! Here at MRO, we wish her and Jack all the happiness in the world. Take a look at the gorgeous photos that Meaghan has decided to share with us. Truly stunning!

By Sarah, on July 6th, 2021, under New and Rumors // Comments Off on Meaghan Announces her Pregnancy

Meaghan To Star In Canadian Comedy ‘Children Ruin Everything’

Meaghan Rath, who has starred in BBC America’s Being Human and has featured in CBS’ Hawaii Five-O and The CW’s Supergirl, is to star in CTV comedy Children Ruin Everything.

Rath will front the Canadian half-hour series, which comes from Modern Family and How I Met Your Mother exec producer Chuck Tatham and Schitt’s Creek writer Kurt Smeaton. She will also exec produce.

Rath stars as Astrid, a smart, funny, and caring mother who is feeling the pull between returning to work and stay-at-home motherhood. Although she’s more than ready to leave the stained sweatpants and kid scheduling behind to focus more on her career, she also wonders what life would be like with a third child. Casting is still underway to find her partner James.

Children Ruin Everything is produced by New Metric Media in association with CTV and with the participation of the Canada Media Fund. Bell Media Distribution is the international rights holder. New Metric Media is the series exclusive sales agent.

By Sarah, on February 16th, 2021, under New and Rumors // Comments Off on Meaghan To Star In Canadian Comedy ‘Children Ruin Everything’

Hello, everyone! I hope you’re all having a great start to 2021. Today, I have for you several additional stills from Meaghan’s stint on New Girl. I hope you all enjoy!

By Sarah, on January 4th, 2021, under Gallery Update, Television // Comments Off on Additional ‘New Girl’ Stills

Thanks to the incredibly talented Margos, we have a brand new look for the new year! We hope you all love it as much as we do. 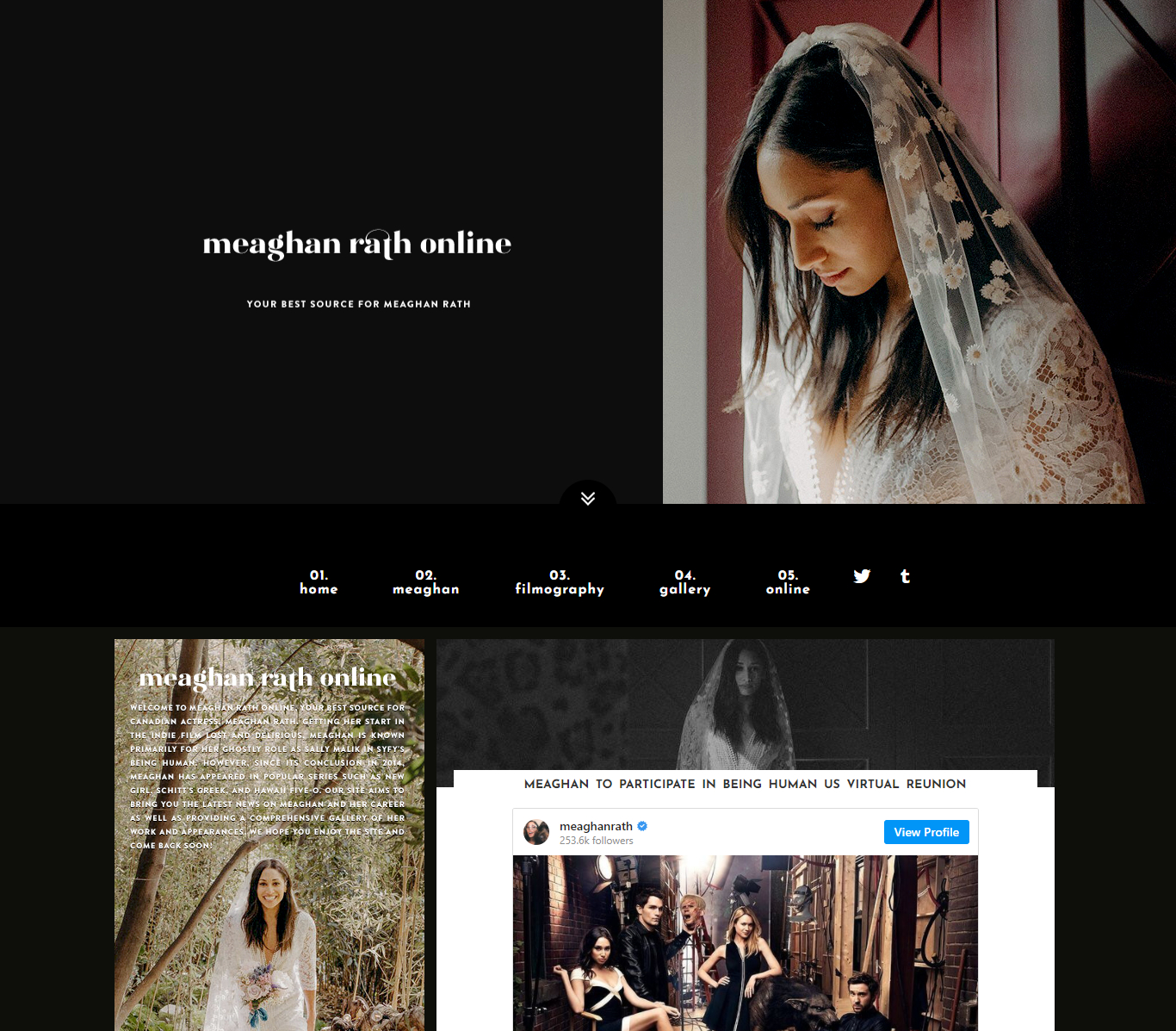 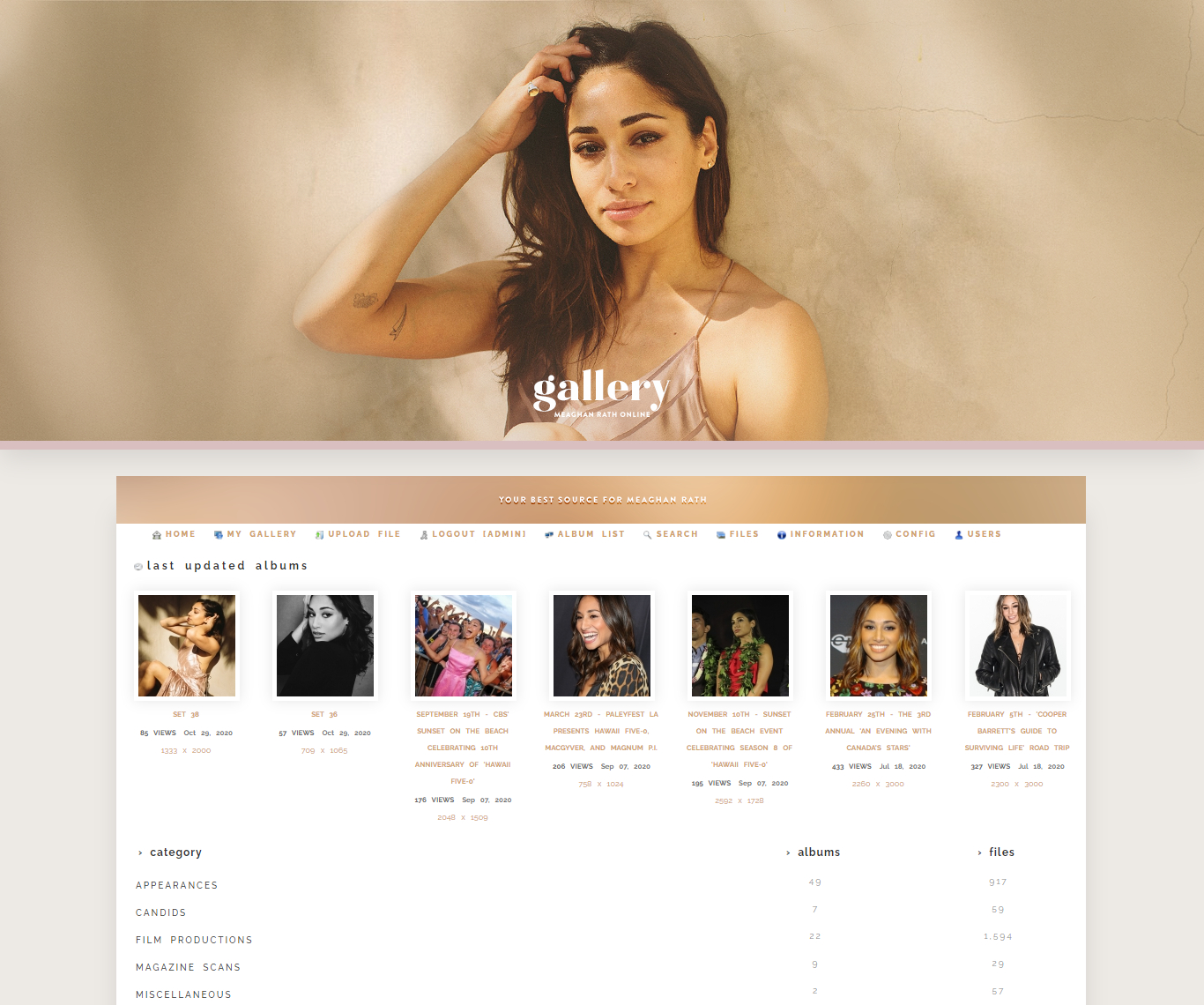